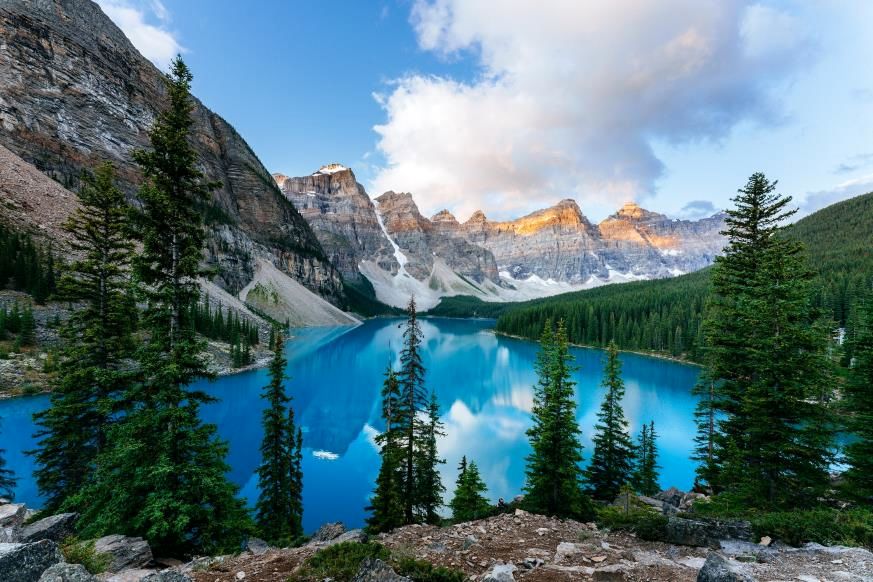 Canada is renowned for its lovely lakes, as the country's alpine locales lend themselves to the creation of crystal-clear mountain waters. Lake Louise in Banff National Park in the province of Alberta is perhaps the most popular, and it's "clearly" (pun intended) gorgeous. But our pick is the nearby Moraine Lake, a glacial-fed body of water with a transparent blue hue nestled in the Valley of the Ten Peaks. The color changes depending on where the lake is viewed from, the time of day, and even the time of year—summer provides the brightest hue. The lake is so stunning it was even featured on the Canadian $20 bill in the 1970s. These are more of the most popular destinations in Canada. 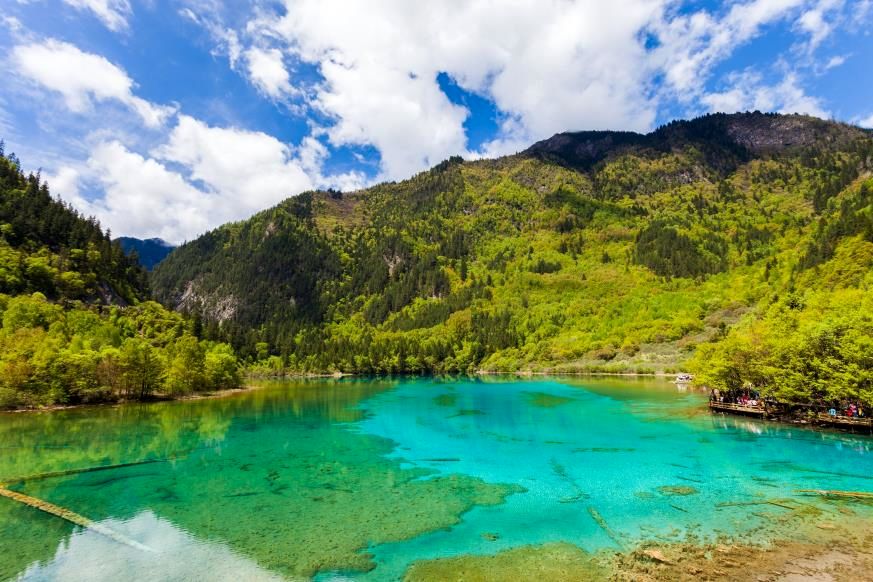 This lake in Jiuzhaigou National Park in southwest China sometimes acts like a mirror to reflect the surrounding landscape, which is particularly awe-inspiring in the fall. So it's no wonder that Five Flower Lake has a mythical history: A goddess is said to have dropped her mirror, which shattered into many pieces that formed the lakes of the park, including this one. The lake also provides a view right down to the fallen tree trunks at the bottom of its 16-foot depth, with varied, vibrant colors seeming to rise up from below. For the local people, this is a sacred lake; another legend says that wherever water from the lake is sprinkled, abundant flowers will grow. China also has one of the most beautiful beaches that naturally glow. 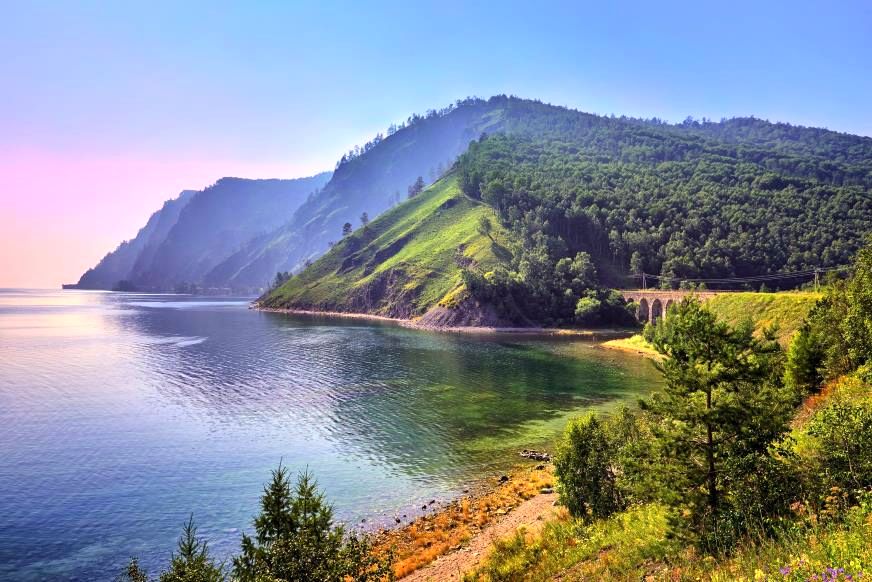 You may not have even heard of it, but this Siberian lake is the oldest, largest, and deepest freshwater lake in the world. At a mile deep, it holds 20 percent of the earth's freshwater, which melts into the lake from the Siberian mountains. But besides its massive size, Lake Baikal is also one of the clearest, with depths visible up to 130 feet. "The water of Lake Baikal is the color of turquoise, more transparent than the Black Sea," the writer Anton Chekhov wrote in a letter. "I myself have seen to such a depth, with rocks and mountains plunged in the turquoise-blue, that is sent a shiver all over me…I shall never forget it as long as I live." 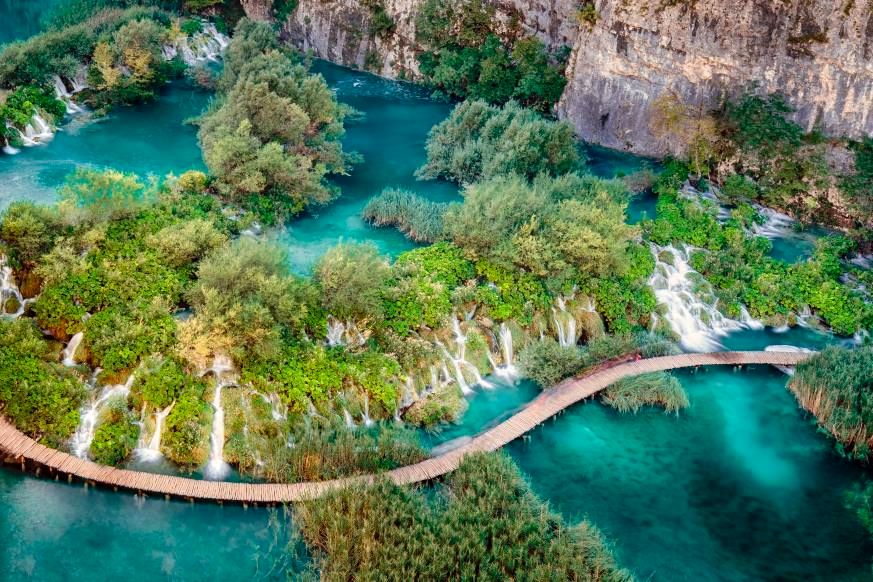 Like something out of paradise, the water of these cascading lakes is not only crystal clear but flows over a series of waterfalls, lending an even more magical quality to the place. The lakes were formed as deposits of tufa, a type of stone similar to travertine, built up along a river, creating natural dams that led to the formation of the lakes. Sixteen of the lakes are named, but there are many other smaller pools as well. Add in underground caves, moss-covered rocks, and verdant forests, and enchanting Plitvice Lakes looks like a fairy tale. It's also one of the most awe-inspiring UNESCO World Heritage Sites.

The deep blue waters of this lake reflect the mountains that ring the crater's edge. The deepest lake in the United States, it was formed over seven thousand years ago when an eruption caused a volcano to collapse in on itself, creating a "caldera." Noted by the National Park Service as one of the clearest lakes in the world, Crater Lake has no incoming streams to bring sediment or minerals; it's just water, fed solely by rain, snow, and glacial springs. The water is so pure in quality that the estimated visible depth is over 130 feet. This remarkable body of water also has mystically-named features like Wizard Island, which is home to a crater called the Witches' Cauldron, a small island of rock spires called Phantom Ship, and the Old Man, a giant, upright hemlock log that's been bobbing around the lake for over a century. Crater Lake is also one of the most scenic getaways in every state. 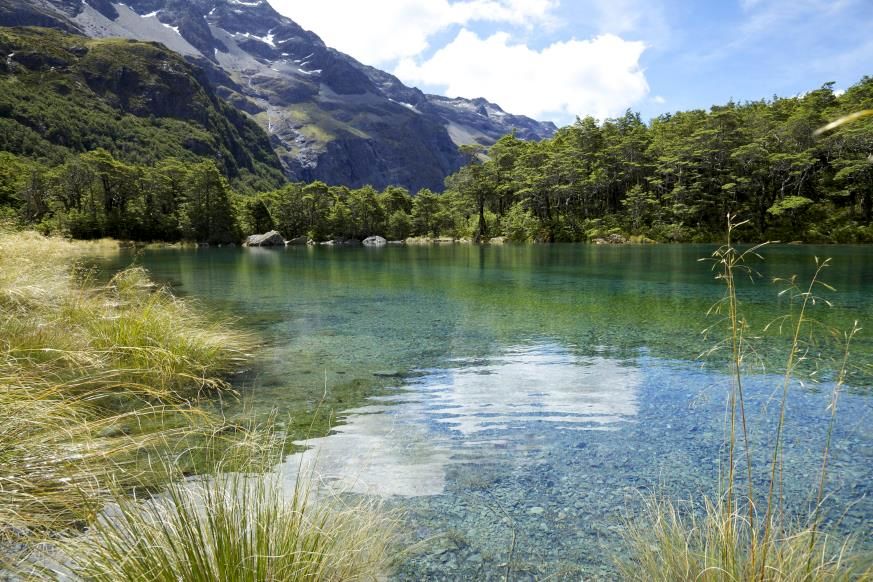 This lake on New Zealand's South Island is the clearest lake in the world, according to science. In 2011, scientists from the country's National Institute of Water and Atmospheric Research conducted a study and found that the clarity of the lake is surpassed only by very clear seawater. Also called Rotomairewhenau, the Blue Lake is located in Nelson Lakes National Parks. This body of water is actually fed by another glacial lake, Lake Constance—both are free of run-off debris, which keeps the water clean and very cold. Its purity also makes the lake sacred to the local indigenous people. These are the most breathtaking glaciers in the world.

Mountainous Switzerland is another country known for its abundance of crystal blue lakes, including Lucerne, Brienz, and Oeschinen. We had a hard time choosing just one to add to our list but settled on the small yet striking Lake Blausee. Fed by underground springs, the lake is completely transparent, with a lovely blue-green color. Sunken tree trunks and boulders are visible all the way down to the bottom 40 feet below. This is another lake seeped in legend: According to the tale, a broken-hearted, blue-eyed maiden drowned in the lake, and her tears turned the water its azure hue. Switzerland also has one of the 9 heart-shaped lakes and islands around the world. 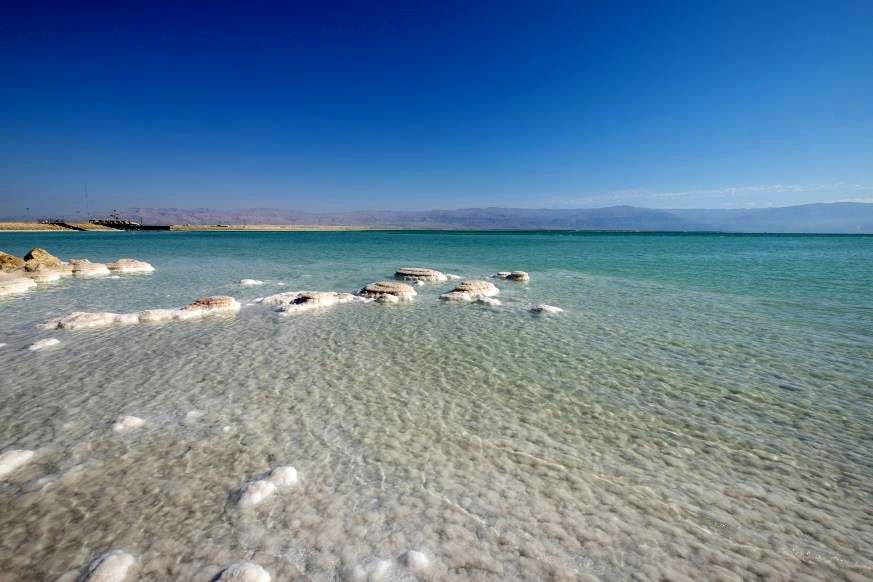 Although it's called a "sea," this isn't an ocean—it's a saline lake surrounded by desert. With its extremely high salt content, five to nine times that of the ocean, the clear water of the Dead Sea is said to have medicinal properties. But because of its salinity, no fish can survive in it, hence its name. The Dead Sea has only one main source, the River Jordan, and the only way water gets out is through evaporation, during which its minerals are left behind. But although the lake is rich in these minerals, the water still retains its clear properties because there's nothing else in it. The Dead Sea also ranks in our list of 80 gorgeous travel photos from around the world. 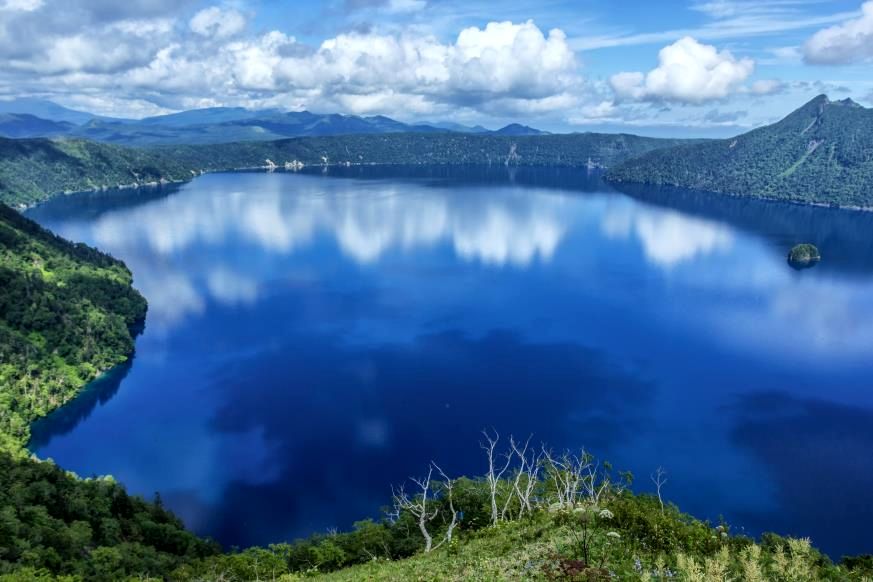 Another caldera lake that formed from volcanic eruption thousands of years ago, this bedazzling body of water on Japan's island of Hokkaido is part of Akan-Mashu National Park. Called the "lake of the gods," it is often covered in fog and mist—to see the surface of the water is said to bring bad luck from the spirit who lives in its depths. But when it can be seen, the lake itself is crystal clear, with water visibility close to 100 feet, because no rivers empty into it to deposit sediment and debris. Nearby, Kaminoko-ike ("child of the gods") Pond got its name because underground springs from Lake Mashu are believed to feed it, which is why the pond also has such transparent water. This is the real difference between a pond and a lake. 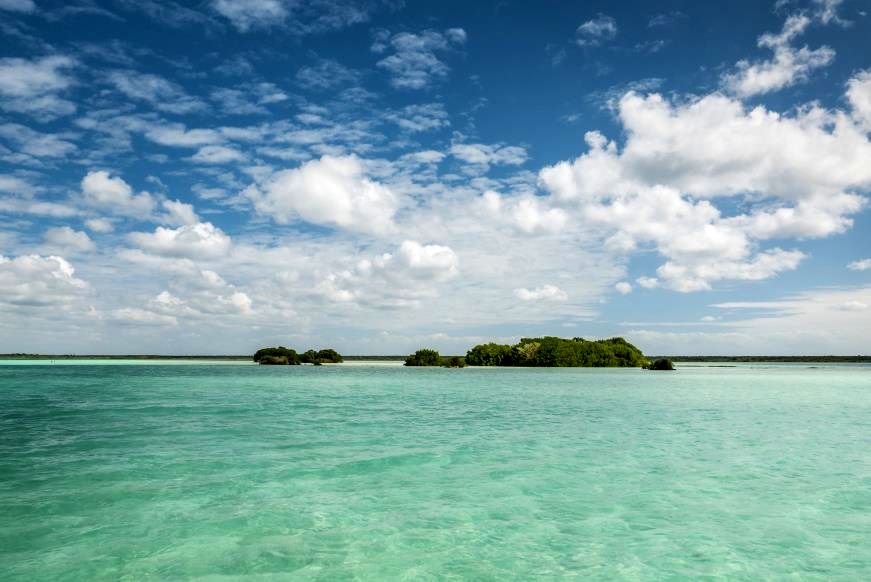 Mexico has some gorgeous Caribbean water on its east coast, and Lake Bacalar looks like it's part of it—with beaches, jungle, and mangroves, it's nearly impossible to tell the two locales apart. Yet Lake Bacalar has one big difference: It is actually a freshwater lagoon. Located on the Yucatan peninsula near the Belize border, the lake sits inland from the sea, narrow and long at 26 miles. Fed by a series of underground rivers, its white sand bottom allows the clear water to change color throughout the day, from turquoise to indigo, earning it the vibrant nickname "lake of seven colors." Check out these absolutely stunning places on Mexico's Pacific coast. 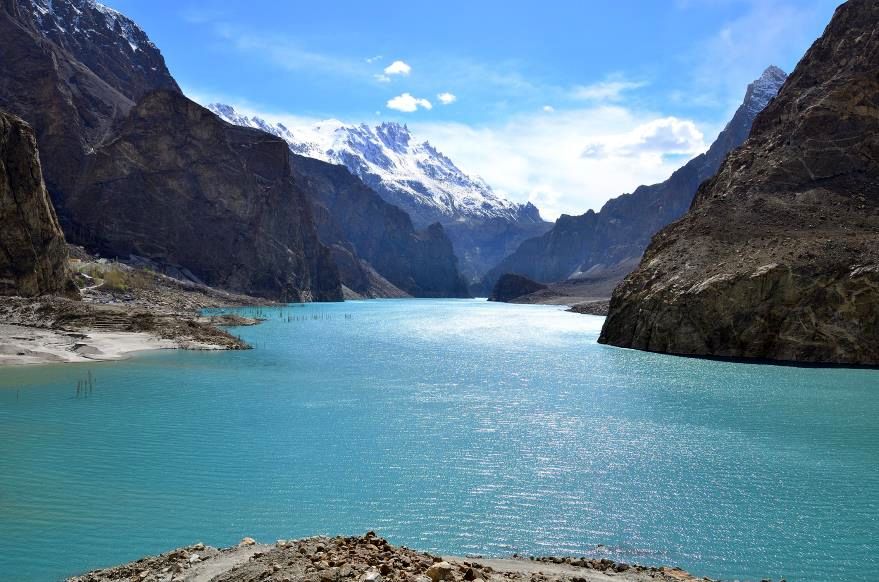 This newly-formed lake is somewhat of a silver lining to a major tragedy. In 2010, a landslide in northern Pakistan tumbled over the village of Attabad, leveling homes and killing 26 people. But the disaster also created a natural dam for the Hunza River, which led to a brand-new body of water. Although some people had to move when the lake was formed, it's now one of the most beautiful spots in the region and an attraction in itself. Like other glacier-fed lakes, the crystalline Attabad gains a spectacular bright blue color in spring and summer when the glaciers melt. 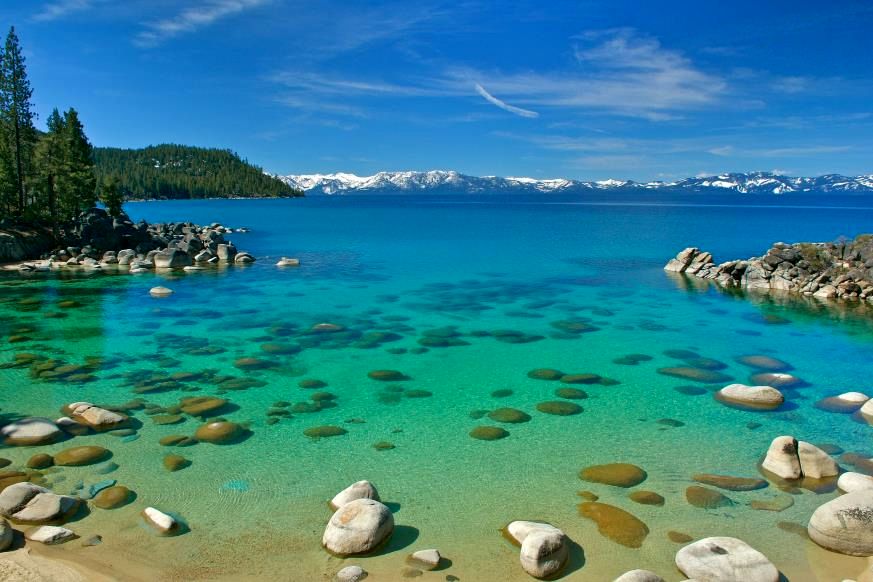 This playground of the rich and famous also has some exquisite natural scenery, including its sparkling waters. Straddling two states, Lake Tahoe is the second deepest lake in the United States, after Crater Lake, and its locale in the Sierra Nevada Mountains provides it with clear, pure waters that often appear as a bright cobalt blue. But some research has found that the striking color of the lake is not actually correlated with clarity, but rather with the level of algae present (the lower the algae content, the bluer the lake), which could have implications for conservation of the lake's ecosystem, as well as its beauty. These are the most beautiful lakes in America for swimming. 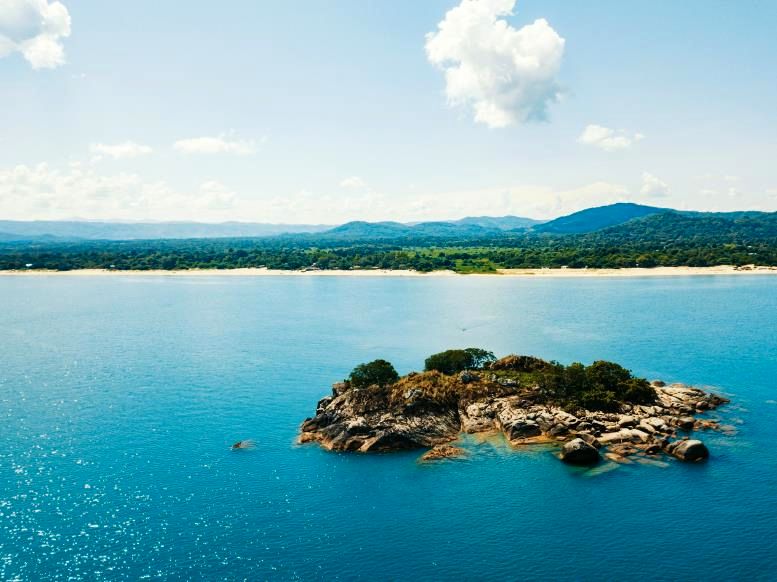 Running along much of the small African country of Malawi's eastern border, and also touching Mozambique and Tanzania, this large, deep lake is "meromictic." This means the layers of the lake don't intermix, so all the sediment stays on the bottom and the top appears totally transparent. But unlike some other crystal-clear lakes, this one actually supports a huge endemic fish population, many species of which aren't found anywhere else on earth. Because of this, the lake is an important conservation site—not just to keep the water clarity at its most pristine, but to protect the abundant wildlife and biodiversity within. Here are more lesser-known natural wonders that will take your breath away. 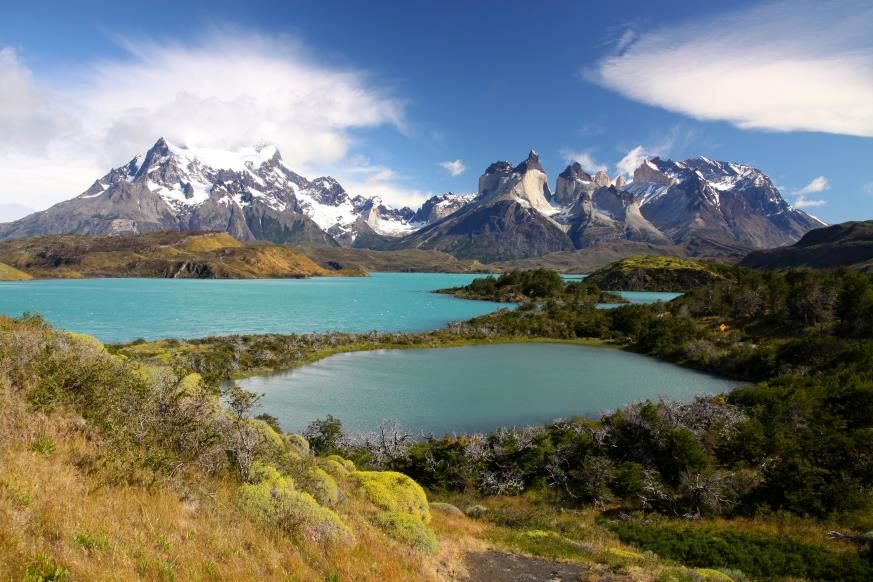 This luminous lake in remote Patagonia, southern Chile, often reflects the spiky mountains called Cuernos ("horns") del Paine that surround it in Torres del Paine National Park. Fed by glacial waters, the lake has brilliant colors of all shades that seem to change throughout the day as the light shift—besides hues of turquoise and blue, lavender, and even orange may appear. In addition to the water's shimmering beauty and the majestic peaks towering over it, the area around the lake is home to some of South America's most interesting wildlife, including the guanaco, a "camelid" that resembles a llama or alpaca. 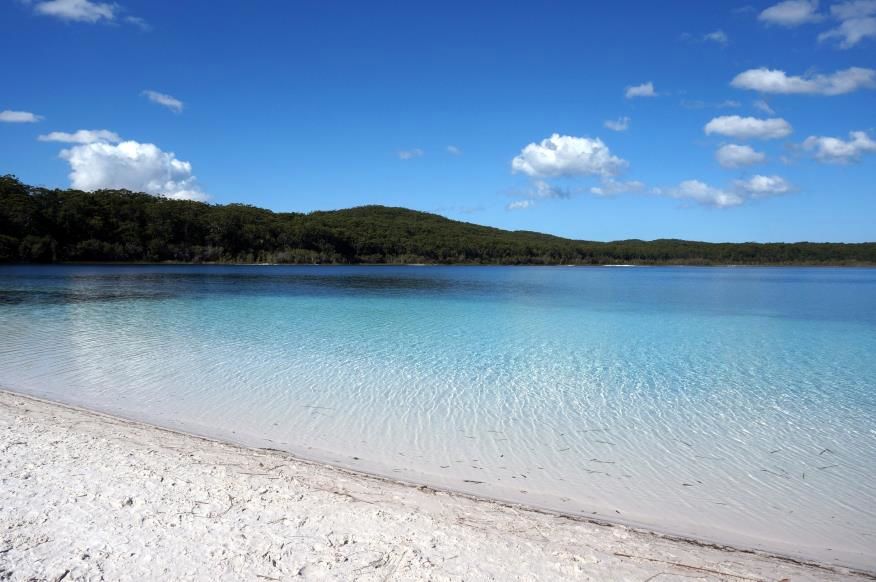 Located on Fraser Island in Queensland, this completely clear lake looks like something from the nearby ocean coast. Rimmed by white sand beaches, the lake owes its purity to its geography: Fraser's Island is the world's largest "sand island," and it also has half of the world's "perched lakes," sand dune depressions filled entirely of rainwater, including Lake McKenzie. The lake has no rivers that feed it; nor does it drain to the ocean. The purity of the lake means that no fish can live in it, so the water remains glittering blue all the time. Next, check out these gorgeous beaches with the clearest water in the world.